'Birds embody our aspirations, fears and spiritual yearnings. They may be a familiar part of our everyday life,..but their ability to sing and fly is mysterious, setting them apart from all other creatures. Their enviable freedom to escape the everyday by soaring into the beyond may explain why they are at the heart of many of the world's creation myths, and why images of them have been used to represent the human soul ascending to Paradise, the divine spirit descending to Earth, or communication between men and gods.'
From 'The Bird in Art' by Caroline Bugler


The Ascension drawings (those with the dove placed within the black background) came about at a significant time in my life. Up until that point, birds had featured within my work but only as characters within a scene, never as the main focus.

At the time of making the drawing, my dear mother was terminally ill and I was helping to care for her. Naturally, during this time, I began to question more fervently what happens when we die and if there was any life after.
I found a dove in my garden and it became the metaphor through which I explored this question.

Birds, especially doves, have often been used in Christian stories to represent the spirit. Through drawing the dove, I was able to give it a new life within the drawing.

Whether the dove drawings depict a bird that is alive or dead is intentionally left ambiguous and is left open to the interpretation of the viewer and what they see or perhaps believe. But for me the bird will always live.
In short, the work represents my dearest hope.

The doves are depicted floating or ascending. My aim was that the drawn doves looked weightless, as if floating in an unknown realm, or perhaps in the weightless black of outer-space - I never decided which. Through these pieces I experimented with my drawing materials, to see how each type of pencil reflected light, my aim was to create the sense of depth without using the techniques of perspective. Varying between the matt quality of the carbon and the reflective nature of the graphite and oil pencil, I was able to heighten the feeling that the birds and objects are floating in space.

The dove itself was drawn from several photographs I had taken of the dove I found in my garden, and although only a small area of the image remains white, the whole drawing was drawn on white cotton paper. The black background was meticulously built up, layer by layer, to get the intensity of the darkness. My intention was that the white from the paper would create a striking contrast to the surrounding darkness, when seen shining through the doves feathers. 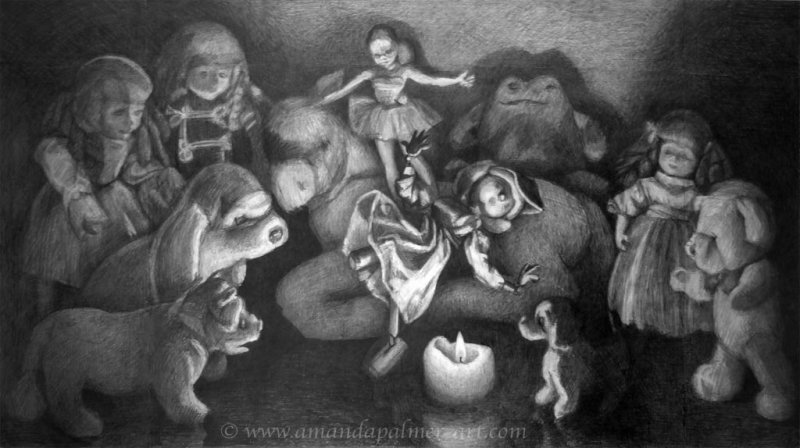